Q&A: Shameel Jasvir: ‘The future belongs to the ethnic market.’ 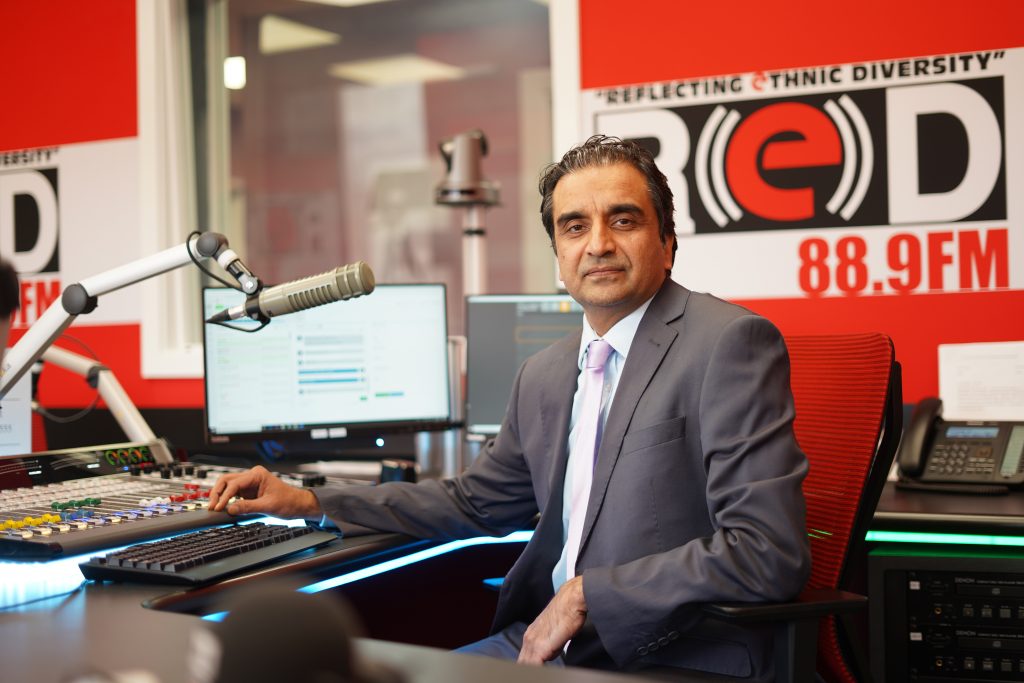 Poet and award-winning journalist Shameel Jasvir has been involved in tackling social issues with his work since the ‘90s, first in India and later in Canada.

His mission? To break down social issues and policies and help new Canadians adjust to their new life through engaging and reflective content, particularly for the South Asian diaspora.

In 2012, Jasvir joined OMNI Television as a news reporter and coordinator for Punjabi-language programming. He’s also a radio host and news director at RED FM, which broadcasts primarily for the South Asian community.

“I discovered that journalism is a service, not just a profession,” Jasvir says. “We can work as a bridge to help our communities connect with the Canadian mainstream and help then in their integration in the Canadian life.”

CEMA spoke with Jasvir about his journalism career, about the future of ethnic media, and the inspiration behind his most recent book of poetry.

Let’s go back to the very beginning. What inspired you to pursue journalism?

My first love was literature. The thing that inspired me to go into journalism was the potential that I saw in it to pursue my passions. It gives you a chance to see the big picture, to see things in totality. I was passionate about social causes, social issues, and wanted to contribute in my own way. Those were the things that always excited me to do something. For me, journalism was the best medium to pursue my goals and to work on issues I was passionate about.

Aside from being a journalist, you’re also a poet and published your first book in 1989. Where does your inspiration come from?

I started writing poetry when I was in school. I’ve been always intrigued by some fundamental questions of life: what is the purpose of life? Why are we here for and what kind of life should we live? These questions were my first motivation and inspiration.

My third book of poetry Dhooph (Incense) published in 2019, got good reviews and awards by literary organizations and institutions. Writing this book was an interesting experience. The book is divided into three sections.

I was working at OMNI and would take the train to go to downtown Toronto from Brampton and would spend almost two hours in the train every day. In morning and evening, I would use that time to write poems. The train became a metaphor, a kind of background music of the book. I visualized human life like a train journey. I used the language of the train to talk about all the big questions of human life. These train poems are of the first section of the book. The second section is named ‘A dad’s poems’, and poems in this section are about the sensibilities of fatherhood. This can be experienced through a father’s relationship with his kids, kids’ relationship with their dad, how a man sees life as a father, and also about our relationship with the big dad, God. Poems in the third section are about the crisis of modern human civilization that reflects in our relationship with nature, with other humans, with other forms of life and with everything. The book is about the violence caused by materialism in human life.

You began your journalism career in the early ‘90s in India. What was it like adjusting to journalism in Canada compared to home?

I took it as a creative challenge and turned it into a learning experience. The focus was always the community, but I got the chance to learn about a different world, a different country and its politics and culture.

Working here in Punjabi or ethnic media, I realized there are so many issues that only ethnic media or journalism can address. Our communities have unique issues and problems, and they need their own platforms to discuss and highlight those issues. We, as immigrant communities, also need to understand Canadian issues and the country’s political debate in our own languages. I discovered that journalism is a kind of service here, not just a profession. We can work as a bridge to help our communities connect with the Canadian mainstream and help then in their integration in Canadian life.

That’s one of the pillars of ethnic media. On the one hand, it’s about celebrating one’s culture and on the other, it’s also about giving people the information they need to adjust to their new community. What’s your hope for the future of ethnic media in Canada, going forward?

I’m very hopeful about the role of ethnic media. It is not just about the languages; it is about the culture and a way of life. A new kind of ethnic media can also emerge that would be in English language. Diverse communities have their unique issues, and they don’t get space in the mainstream world. Ethnic media in the English language can be the next level. It is already happening in the South Asian community. We have English newspapers and some English shows.

And mainstream media companies would also diversify in languages and would target ethnic market segments, that will bring new resources in ethnic media and would attract new talent.

We also see some ethnic media organizations emerging on the national scene. RedFM is one such example. It has stations in three cities, and plans to expand to other cities.

I am very hopeful and confident about ethnic media in Canada. The Canadian media landscape will change in the coming years. It already has a saturation point in the mainstream market and future expansion can only happen in ethnic market.