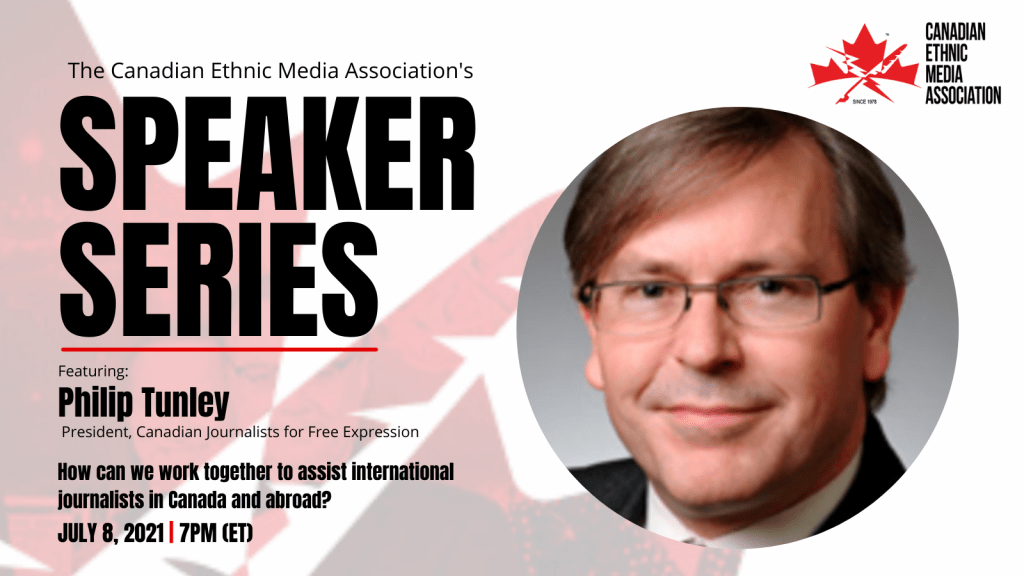 The Canadian Ethnic Media Association extends an exclusive invitation to its national Membership to attend the sixth instalment of its Speakers Series for 2021. The guest speaker is Philip Tunley, President of Canadian Journalists for Free Expression, joined by CJFE Board Members:  Communications Consultant Rosa Damonte and award-winning Journalist Michelle Shephard.  Their discussion will focus on CJFE’s defence of courageous reporting around the world for more than 40 years, and how CEMA can work with them to assist international journalists in Canada and abroad.

*Thursday, July 8, 2021 at 7 p.m.  Please note scheduling is one week later than usual this month because of the Canada Day holiday.

CJFE monitors, defends and reports on free expression and access to information in Canada and abroad. Rooted in the field of journalism, CJFE promotes a free media as essential to a fair and open society. CJFE boldly champions the free expression rights of all people, and encourages and supports individuals and groups in the protection of their own and others’ free expression rights.

A non-profit, volunteer-driven organization, CJFE has devoted itself to create meaningful change that preserves the fundamental rights of freedom of expression, freedom of the press, and access to information to all citizens. Learn how CJFE works with organizations and individuals around the world to protect reporters and to preserve the right to free expression for all.

Philip Tunley joined the CJFE Board in 2005. His expertise as a lawyer has provided guidance and recommendations on the most effective strategy to battle free expression issues within the legal framework. Among these issues was the formal confirmation of CJFE as manager of IFEX. Philip is a member of the Canadian Issues Committee, a past member of the Personnel Committee, a former CIFET Trustee, and served on the Executive Committee as the Vice President from 2007 to 2009. From his perspective, the staff and Board have made progress in pulling together in terms of the structure and governance of CJFE since 2005. In the future, Philip would like to see Board members deal with fewer administrative matters, and spend more time on their core mandate and commitment to advocating for the right to free expression. Philip served from 2004 to 2009 as a member of Metro Toronto Committee of the prestigious Judicial Appointments Advisory Committee.