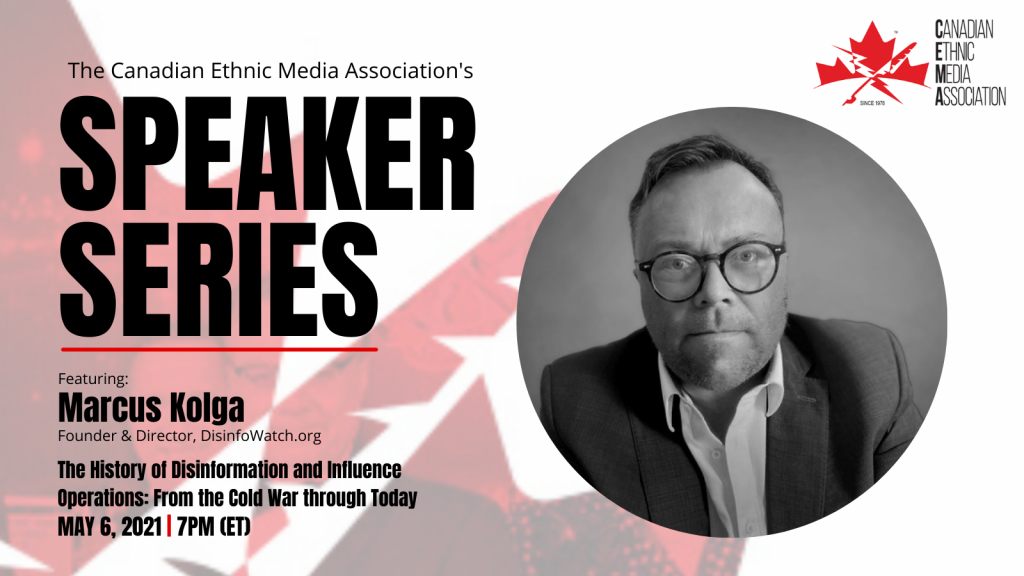 The Canadian Ethnic Media Association extends an exclusive invitation to its national Membership to attend the fourth instalment of its Speakers Series for 2021. The guest speaker is Marcus Kolga, President of Liefa Communications; Realworld Pictures; Founder and Director of DisinfoWatch.org; and Senior Fellow Macdonald-Laurier Centre for Advancing Canada’s interests Abroad Thursday, May 6, 2021, @ 7:00 p.m.

As the Canadian media environment becomes increasingly polluted with disinformation, misinformation and conspiracy theories, knowing how to detect, track and report on it is a critically important skill for journalists, media professionals and community leaders. CEMA Member Marcus Kolga, leading Canadian expert on disinformation and Founder/Director of DisinfoWatch.org, who has analysed and exposed foreign disinformation and influence campaigns since 2007, discusses The History of Disinformation and Influence Operations:  From the Cold War through Today.

Don’t miss this important discussion of what you need to know about our information landscape and common techniques used to manipulate media.  Learn how to think beyond verifying individual posts to monitoring problematic narratives; practical tips and tools to verify online content; tools and techniques to monitor spread of online narratives; and effective methods to slow down disinformation.

After you have attended our Speaker Series presentation with Marcus Kolga you are invited to participate in a free Webinar Workshop, entitled How to Spot, Monitor and Counter Misinformation and Disinformation, scheduled exclusively for CEMA Members on Tuesday, May 11 at 3:30 p.m. Stay tuned for information on how you can register.

He frequently writes and comments on Russian and Central and Eastern European issues and disinformation in Canadian and international media.

He has produced several internationally screened and broadcast documentary films that have focused on international affairs and human rights including the Soviet Gulag, and NATO’s ISAF mission in Afghanistan and the challenges it faces from Vladimir Putin’s neo-Soviet imperialist ambitions. His films have been broadcast nationally in Canada, Sweden, Estonia, Latvia, Finland and have been screened at festivals in the US, UK, Japan, Australia and Germany.

A regular commentator on international affairs and human rights, Marcus’ articles have been published by The Globe and Mail, The Toronto Star, The National Post, The New York Daily Mail, Macleans, The Atlantic Council and other European publications.

He is a senior fellow at the Macdonald-Laurier Institute Center for Advancing Canada’s Interests Abroad.

Marcus was made a member of Estonia’s Order of the White Star by President Toomas Hendrik Ilves in 2017.