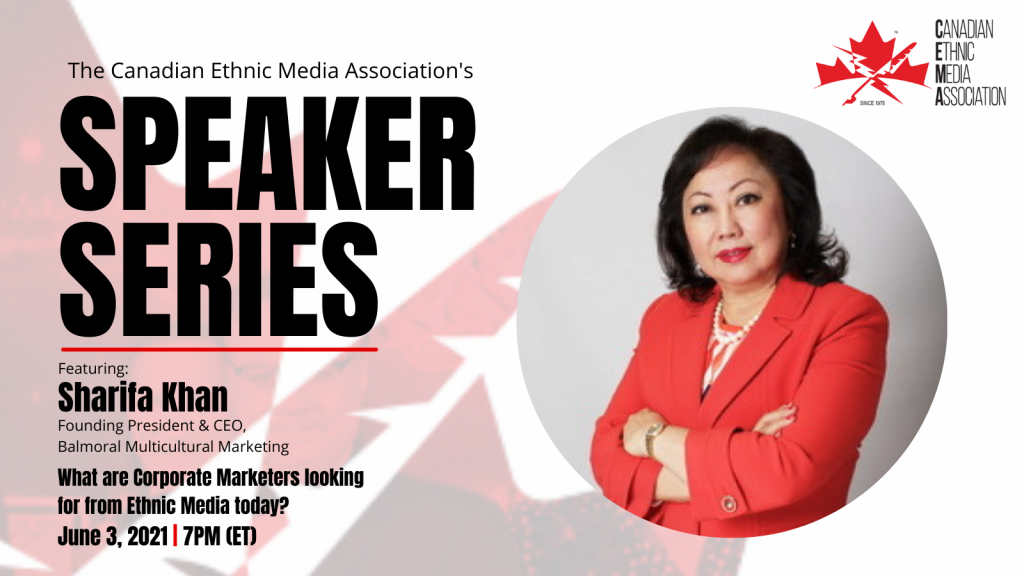 The Canadian Ethnic Media Association extends an exclusive invitation to its national Membership to attend the fifth instalment of its Speakers Series for 2021. The guest speaker is Sharifa Khan, Founding President and CEO of Balmoral Multicultural Marketing, who has been connecting corporate marketers to ethnic communities across Canada for more than 30 years.  Sharifa will be speaking on the topic, “What are Corporate Marketers looking for from Ethnic Media today?” Thursday, June 3, 2021 at 7 p.m.

As the landscape of population and immigration continues to change, corporate marketers are finally accepting the fact that their brands can no longer ignore the diversity of Canada, nor the consumption and purchasing power of its immigrant population.  Mainstream brands recognize the importance of connecting to diverse audiences and they look to ethnic media to help them with their targeting. They need information presented in a certain way, so they can justify allocating advertising budgets that would help them reach their ROI.

Don’t miss this important discussion of what you need to know to appeal to corporate marketers and to help them reach their target audiences.  You have the in-depth knowledge of the communities you serve, and the more meaningful and creatively persuasive methods of delivering messaging to them.  The nuances of their languages of comfort are an efficient entrée, as well as insider advice on how to present graphic, musical or electronic embellishments, true to the artistic and cultural preferences of the ethnic group.

Milestones behind. Miles ahead. Sharifa Khan has been in the marketing and corporate communications industry for 40 years. The first chapter in her success story began with her envisioning and establishing an industry that is known as multicultural today. In doing so, she just didn’t author her success story, but paved the future for every multicultural professional. 40 years later this story continues with her at the helm of one of Canada’s oldest, most well-known and largest multicultural advertising agency.
Sharifa Khan is the President and CEO of Balmoral Multicultural Marketing, which celebrated its 30thanniversary in 2019. It is the oldest multicultural marketing agency in Canada, where she leads a team of seasoned ethnic marketing professionals to service corporate, government and non‐profit organizations. She has helped brands connect and engage with Canada’s diverse ethnic communities.

Her motto is “Building Bridges of Understanding”. She is a maestro in putting a cultural lens to strategy and brands, to drive considerations and solidify relationships between mainstream and these ever-growing market segments.

She has led her agencies in winning numerous medals at the Cassie, the Strategy Marketing Awards and the Summit International Awards for Ontario Lottery and Gaming Commission (OLG), BMW, Canada Life, Ottawa Tourism, Britta and Clorox.

Balmoral’s clients have included Government of Ontario, OLG, BMW, Chatr, Fido, Rogers, Canada Life, Ottawa Tourism, Clorox, Metrolinx, Brita, Dairy Farmers of Canada, Burt’s Bees, Campbell’s Canada, Rémy Martin, BMO Financial Group, Canadian Cancer Society, just to name a few. And it has offices in China, India and Hong Kong.
In 1999, Sharifa was awarded a federal recognition from then Prime Minister Jean Chrétien for her entrepreneurial success. In 2002, she was a recipient of the Queen Elizabeth II Golden Jubilee Award and in 2012, the Diamond Jubilee Award. In 2004, she received the Alumni Achievement Award from Ryerson University. She is also a recipient of the 2013 Top 25 Canadian Immigrant Award for her achievements. And in 2018, Sharifa was named one of eighteen Women of Influence in Canada.
For further information, please contact:
Averill Maroun
Canadian Ethnic Media Association Board Member
Marketing and Media Relations
E:  [email protected]