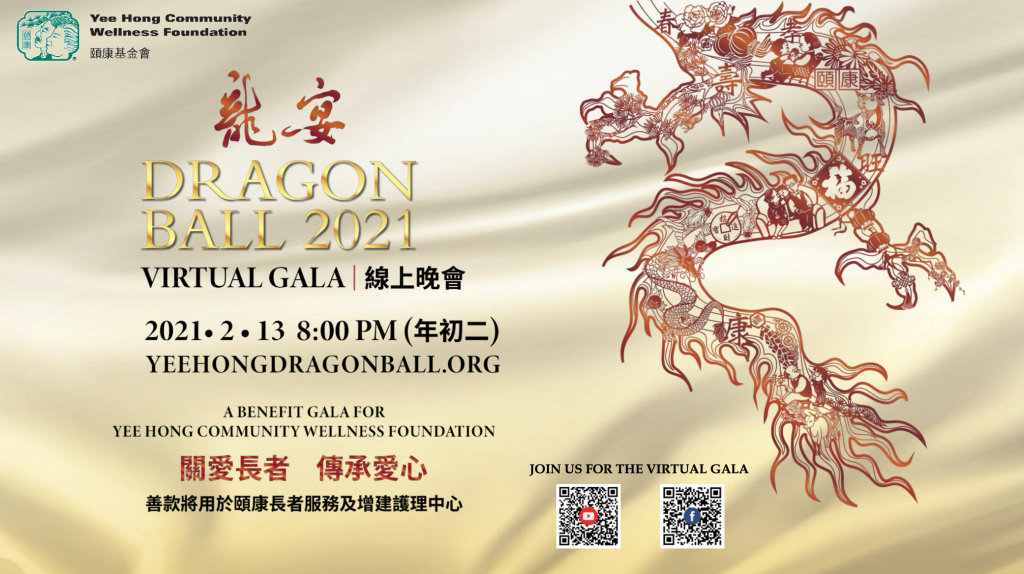 Dear CEMA Members,The Canadian Ethnic Media Association has partnered with the Yee Hong Wellness Foundation in support of their first virtual Chinese New Year Dragon Ball.  Now in its 32nd year, Dragon Ball 2021 continues to raise much-needed funds for future development and maintenance of Yee Hong Centres for Geriatric Care. Serving Chinese, Japanese, Vietnamese, South Asian and Filipino communities. Details on how you can view and participate in this year’s virtual Dragon Ball are below.

Dragon Ball goes virtual to celebrate the Year of the Ox

TORONTO, ON – The 32nd Annual Dragon Ball, the signature fundraising gala of Yee Hong Community Wellness Foundation, will be held virtually on February 13 (Saturday) in support of senior care at the four Yee Hong centres and the construction of three new long-term care homes.

Due to the COVID-19 pandemic, this year’s Dragon Ball will be hosted on multiple platforms, offering a unique experience to our philanthropic supporters and the general public, yet maintaining much traditional accent.

Dr. Joseph Wong, Yee Hong Founder and Foundation Chair, said, “Covid-19 has exposed serious problems among many long-term care homes. It is heartbreaking to see so many deaths among seniors, though Yee Hong has held the fort well and we have kept the situation under control.”

“In these unusual times, we see an ever-increasing demand of quality elderly care. That’s why our Foundation has been working so hard to rescue the Dragon Ball gala, the most important fundraising event of Yee Hong, in order to bring much-needed funds to maintain and expand our services,” Dr. Wong added.

In 2017-18, the Ontario Government awarded its first allocation of long-term care bed licenses in 20 years. Yee Hong was awarded a total of 800 beds, which will be accommodated in three new homes in Scarborough, Markham and Mississauga within the next few years. Yee Hong must raise equity capital of $80 million for the construction of the new facilities.

Stephen Siu, President of Yee Hong Foundation, said, “We are facing the greatest challenge ever in fundraising. With the gloomy pandemic atmosphere, fundraising has become tougher and tougher. Many of our fundraising operations have been delayed. But the demand for senior care services is on the rise. While most in-person events have been cancelled, we have shifted gears to hold virtual events and turn crisis into opportunity.”

With Dragon Ball’s pre-eminence in the community, this year’s virtual gala has drawn strong support from corporate sponsors and individual donors. The event is expected to attract a wide range of attendees in Canada and worldwide through multiple online platforms.

Apart from Yee Hong Foundation and Sing Tao-A1 Chinese Radio’s social media channels, iQIYI, the streaming service known as the Chinese Netflix with millions of subscribers worldwide, will also be livestreaming the gala on February 13, starting at 8pm. In addition, OMNI West, OMNI East and OMNI Prairies will broadcast a 90-minute condensed version on February 16 (Tuesday), starting at 5:30pm.

Eight-year-old American piano prodigy, William Zhang, who has been featured by BBC, CBS, FOX and NBC’s “Little Big Shots”, will deliver a special message to the seniors through his performance. The gala program will also feature many customs of Chinese New Year, including traditional Sichuan face-changing, starch-dough figurine making, and a Lion Dance. Devo Brown of City TV, and Jessica Tsang, a healthcare professional, winner of the “Women of Inspiration” award and a former Miss World Alberta are the gala hosts.

Former Mississauga Mayor Hazel McCallion will be turning 100 years old on February 14. A special celebration will be held to thank her long-time support of the Yee Hong seniors.

The virtual gala is open to the general public, but for the full experience, VIP tickets at $600 each are available. Each VIP guest will receive a $150 gift certificate from one of our culinary partners, a $400 tax receipt, and a gift bag that includes a bottle of red wine and other Chinese New Year gifts. Culinary options include a dinner or takeout from R&D Spadina, the best Canadian-Asian fusion restaurant in Chinatown, or a roast suckling pig or a cooked seafood platter from T&T Supermarket, or a deluxe “Seafood in a Box” from SeaMax Trading.