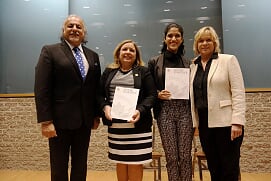 The Ontario Progressive Conservative Party was invited to participate but declined.

Tabasinejad said that the NDP is the party with a clear vision of putting and returning hope to the province. The issues she addressed included, more investment in healthcare, reforming seniors’ care, investing in transportation and lowering Hydro bills.

Martins, a former president of the Federation of Portuguese Canadian Business and Professionals, said that Liberal caucus is reflective of what Toronto is today. And, the services provided serve the needs all communities.

She also said that the various ethnic media are important outlets that provide information and create links between governments and neighbourhoods.

In her opening remarks CEMA’s chair, Madeline Ziniak, said that it is important to create and sustain measures that support the ethnic media.

CEMA partnered with several major organizations to expand and enrich the evening’s experience for the media and the public. They include: Chinese & Southeast Asian Legal Clinic, Association of Macedonian Students at University of Toronto, and the Canadian Ethnocultural Council.

The 3-Party Electoral Conversation was held at Ryerson Auditorium on the campus of Ryerson University.