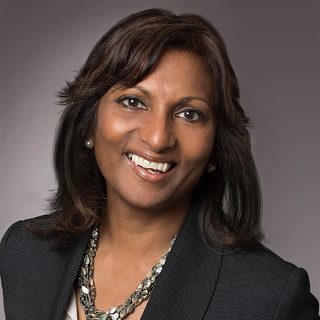 Indira Naidoo-Harris was born in Durban, South Africa. Her family immigrated to Canada, to pursue the dreams they could not achieve under the oppression of apartheid.

The Naidoos settled in central Alberta, where Indira grew up in a small, rural town. Fuelled by her family history in South Africa and her arrival in Canada during our Trudeaumania years, Indira has always been interested in current affairs and world events. That interest led her to the University of Lethbridge, where she earned a Bachelor of Arts in Political Science.

After graduate work at the University of Alberta, Indira moved to the United States for two years with her husband, Randy. She began her career in journalism there, working briefly for NBC and PBS.

From those beginnings, Indira built a successful career as a writer, reporter, producer and news anchor at the international, national and regional levels. Coming to Ontario in the 1990’s to work for CBC’s The National and Midday News, she has anchored for two of Canada’s national television networks (CBC Newsworld and National news, CTV Newsnet), as well as for many local Ontario stations (CBC Toronto and CBC Ottawa, TVO and OMNI Television). Indira has also anchored for regional and national radio, including World Report, and The World at Six, and has hosted the popular current affairs shows, Cross Country Check-Up and The Current.

Throughout her career, Indira has earned admiration and respect as a fair-but-firm, honest, intelligent and credible journalist. She has interviewed Prime Ministers, Premiers, entertainers, authors and other important Canadian and international personalities, winning numerous awards for her work and volunteerism in national and international causes. Close to three years ago Indira finally decided to pursue her interest in government.  She has sat on the Board of Directors for the Reel World Film Festival, the Nelson Mandela Children’s Fund of Canada and on the University of Western Ontario’s Journalism Advisory Council.