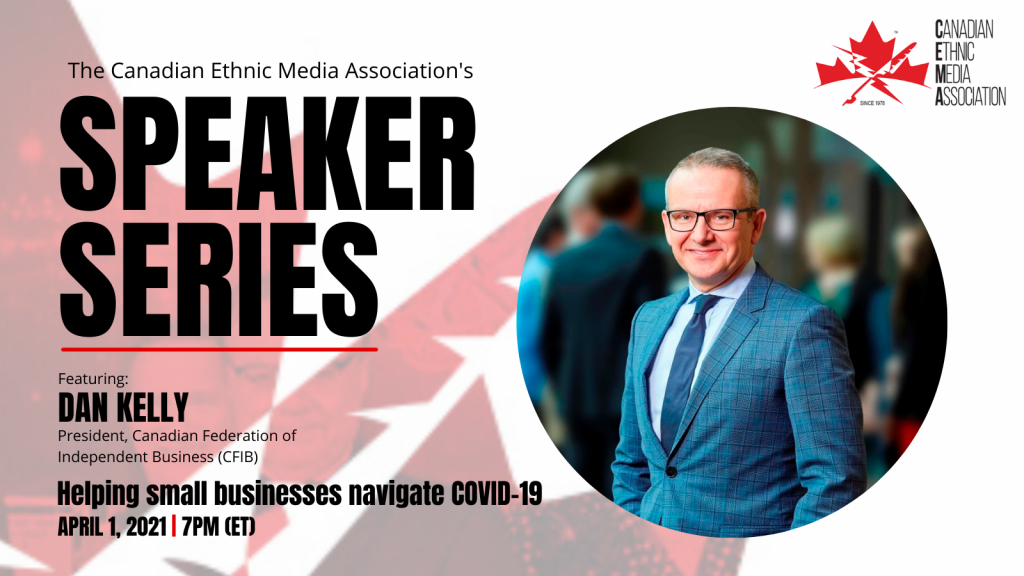 The Canadian Ethnic Media Association extends an exclusive invitation to its national Membership to attend the third instalment of its Speakers Series for 2021. Guest speaker Dan Kelly, President, Chief Executive Officer and Chair of the Board of Governors of the Canadian Federation of Independent Business will discuss how the CFIB is helping small businesses to navigate the Covid-19 crisis.  Thursday, April 1, 2021, @ 7:00 p.m.

This very timely discussion comes as regions across Canada, weighted under mandated public health protocols to reduce, or even lockdown non-essential services, are struggling to keep small businesses solvent, and the national economy fluid.  Dan Kelly explains why and how CFIB liaises with the Federal Government to create support funding during the pandemic, informs businesses how to access financial aid programs, and advises them how to smoothly reopen in the weeks and months to come.

Don’t miss this important discussion of what you need to know for the survival of your own small business, and to convey critical messaging to the communities you serve.  This exclusive opportunity to access Dan Kelly’s invaluable insight and undisputed expertise is made available to you by CEMA, in conjunction with the CFIB.

Dan Kelly serves as President, Chief Executive Officer and Chair of the Board of Governors of the Canadian Federation of Independent Business (CFIB). In this capacity, Dan is the lead spokesperson and advocate for the views of the Federation’s 109,000 small and medium-sized member businesses.

Dan joined CFIB in 1994 as Policy Analyst for the Prairies and, soon after, became Director of Provincial Affairs for Manitoba. Dan led many files, including the call for balanced budget laws and workers’ compensation reform. In 1999, Dan moved to Calgary to become CFIB’s Western Vice-President and was named one of Alberta’s 50 most influential people while in that role. In Western Canada, Dan led the Federation’s work on the growing shortage of labour, training and immigration, publishing many influential studies on these files. In 2009, Dan took on the role of Senior Vice-President, Legislative Affairs, where he led CFIB’s successful campaign to establish a Code of Conduct for the credit and debit card industry. CFIB’s Board of Governors appointed Dan as President and CEO as of June 2012, and Chair in June 2014. In 2015, Dan was named one of the “Top 100 Most Powerful and Influential People in Government and Politics”, by Power & Influence magazine.

Dan has served on dozens of provincial and federal committees and task forces and has represented Canada’s small businesses at the International Labour Organization in Geneva. He currently serves on Finance Canada Payments Consultative Committee (FINPAY) and the Canadian International Trade Tribunal Advisory Committee. Dan is a regular speaker in Canada and around the world on topics like international trade, the payments industry, and skills and labour shortages.

Prior to joining CFIB, Dan served as a policy advisor to the Premier of Manitoba. In this capacity, Dan gained a great deal of knowledge on the legislative and political functions of government – specializing in rural development, transportation and economic matters.

Dan was born and raised in Winnipeg and graduated with a Bachelor of Commerce from the University of Manitoba. Immediately following university, Dan spent a year living and teaching in northern Japan.

Dan and his wife live in Toronto with their young son.