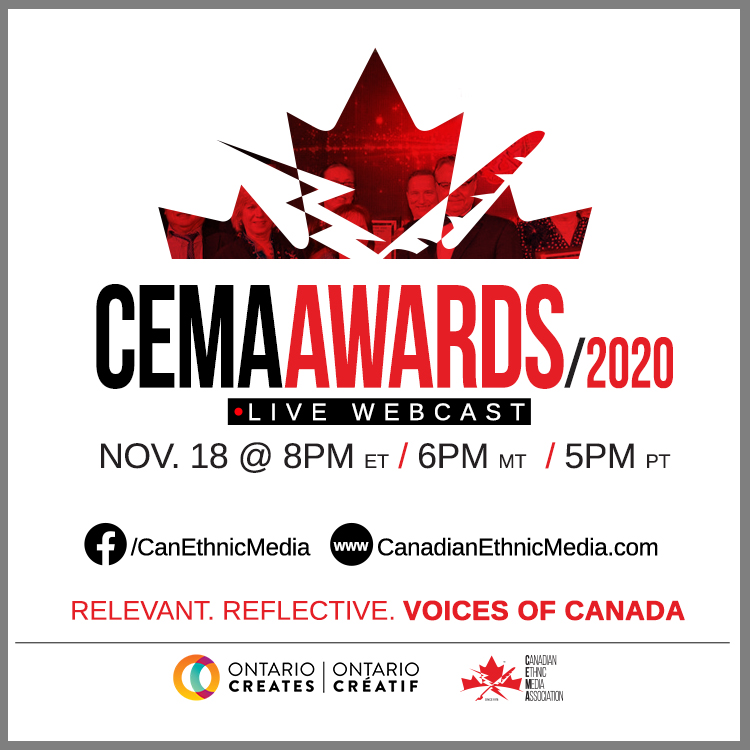 The Canadian Ethnic Media Association (CEMA) is pleased to announce the winners of the 42nd Annual Awards for Journalistic Excellence.  The winners proudly named below, will be showcased in the Association’s first-ever virtual presentation on Wednesday, November 18, 2020 starting at 8 p.m. EST, in Ontario. The production will be hosted by Angie Seth, Anchor of CTV News Channel, Toronto, and well-known Edmonton broadcaster, Stacey Brotzel.

The CEMA Awards recognize outstanding achievement in the categories of Print, Radio, Television, Internet, Podcast – News, Podcast – Feature, Documentary, Innovation, and new this year, Community Engagement.  The 2020 competition drew a large and very gratifying response, across all of the disciplines. In order to celebrate more of the best work of so many illustrious entrants, a jury panel of independent judges made the decision to split the Podcast category into two distinct divisions, News and Features, thereby recognizing the very impressive work of two diverse submissions. They also unanimously voted to introduce the Community Engagement category to honour a high-quality special production borne of a cross-cultural initiative.

The historic awards presentation will emanate from CEMA’s Website: canadianethnicmedia.com, by way of links to the viewer’s choice of either its Facebook Page or YouTube.  Viewers across the country will be able to watch the winners’ at home acceptance speeches, remote Canadian artist performances, and special guest messages at the following local times:

This year’s winners of the Canadian Ethnic Media Association Awards for Journalistic Excellence, in the nine aforementioned categories are:

DOCUMENTARY FILM
Les Sereda and Steve Glassman, Producers/Directors for Dancing on Eggshells. The Making of Shumka’s Ancestors and Elders.

Despite the challenges presiding over this very difficult, Coronavirus: Covid-19 infused year, rendering the traditional celebration of CEMA’s Awards for Journalistic Excellence almost impossible, the Association rose to the occasion.  CEMA chose to be true to its mandate, pay respect to its many years of accumulated momentum and continuity, and to recognize the best work of its contemporaries. The penultimate reward:  its first-ever virtual awards ceremony is in the works, and is poised to roll out starting November 18, 2020, at 8:00 P.M. EST.

CEMA is calling its national membership and those interested in important multicultural and multilingual community journalism to participate in a fresh and ambitious initiative – an historic virtual presentation of the 42nd Annual Canadian Ethnic Media Association Awards for Journalistic Excellence.  You are invited to cheer the remarkable work of some of Canada’s most compelling ethnic media practitioners – tune in to hear their acceptance speeches, and see clips of their award-winning submissions, all from the comfort of your own home.

The Canadian Ethnic Media Association is happy to welcome the return of Ontario Creates as the Sponsor of the 42nd Annual Awards for Journalistic Excellence.  Ontario Creates is an agency of the Government of Ontario that facilitates economic development, investment and collaboration in Ontario’s creative industries including the music, book, magazine, film, television and interactive digital media sectors. ontariocreates.ca

The first virtual presentation of CEMA’s Awards for Journalistic Excellence is produced by Stan Papulkas of Edmonton, Alberta. Stan is a veteran independent television producer who has many years experience working with Canada’s multicultural and multilingual television programmers.